The Early History
by Victor Lieberman

The Jewish community of Grand Forks began forming in the late 1880’s.  Some members migrated directly from Eastern Europe.  Others came from Iola, a failing rural colony, itself the merger of Painted Woods and Garske, two disbanded colonies[1].  Pioneers from Iola included Michael Fishman, Nathan Greenberg, J. Aronovitch, Moses Goldstein, Joseph Horwitz, David Horwitz, Pincus Schreiman, Max Rabinovich, S. Linetzky, Nathan Frankel, Sam Levy, and Moshe Sprung.  By 1891, the city’s Jewish population included approximately 60 families.  Persons drawn by the ongoing expansion of the Great Northern Railroad and an influx of immigrants from Eastern Europe, including those fleeing pogroms in Russia, contributed to the community’s steady growth through the turn of the century.

Rabbi Benjamin Papermaster, sent to America by the chief rabbi of his home town Kovno, in Lithuania, came to Grand Forks in 1891, a week before Passover.  Papermaster’s arrival spurred the coalescence of a nascent Jewish community.  Aticles of incorporation adopted on August 26, 1891, organized the community into the Congregation of the Children of Israel [2].  The first officers of the Congregation were as follows:  Max Rabinovich, a former Iolian settler, served as President; Harry Goldstein, a peddler, as Vice President; and George Schwan, also a peddler, as Secretary.

Soon after incorporating, the Congregation set about erecting a synagogue.  William Budge, an gentile real estate dealer – and between 1898 and 1905 Grand Fork’s Postmaster – donated land on the corner of Second Avenue South and Girard Street, in the center of the city’s Jewish community.  The synagogue, with a seating capacity of 300, cost $3,000 to complete.  Many members of the newly founded congregation mortgaged their houses and peddling wagons to meet the mortgage.  First services were officiated by Rabbi Papermaster on Rosh Hashanah in 1892.

Early intra-synagogue groups included a Chevra Kaddisha [3] society, two adult education groups dedicated to study of the Torah, and a Yiddish theater group that staged plays for the community.  By 1915 congregants had also formed an Ahavath Zion [4] Society of 96 members, including 22 women, a Hebrew Literary Society for children ranging in age from 8 to 15, and a chapter of B’nai B’rith. [5]

From the first, the Congregation placed supreme value on educating their children about the beliefs and practices of Judaism.  Temple members hired their first Hebrew teacher, a Mr. S. Yoffee, in 1894.  Mr. Yoffee established a Hebrew school patterned after the public school system.  He departed Grand Forks in 1899.  A long succession of Hebrew teachers followed his lead.  After 1902, classes were held in a separate building devoted to religious education.

The first generation of the Congregation of the Children of Israel created a tightly knit social and religious community in Grand Forks.  Members who once peddled for a living prospered and became established grocers, clothiers, and jewelers.  In turn, they helped congregants arriving into the city and into the community to establish themselves in similar businesses.  Rabbi Papermaster led community-wide collections for individuals and families arriving without means.

Intra-synagogue groups bound the community on a daily and weekly basis.  Holidays provided the occasions to unite as well.  On Purim, for example, congregants would begin the evening with a celebration at the Rabbi’s house and continue on to the homes of the congregation’s officers before attending services at the synagogue.  The influence engendered by the community’s vibrancy and success extended regionally.  On High Holy Days well into the early 20th century, Jews from across North Dakota traveled to Grand Forks to join members attending services at the synagogue.  Many of the out-of-town attendants knew Rabbi Papermaster from his frequent trips to officiate at ceremonies and to provide guidance and support to Jews scattered across the state. 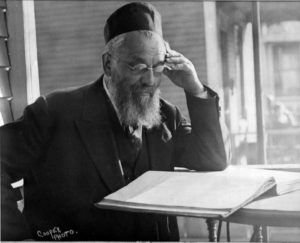 Rabbi Benjamin Papermaster died on September 24, 1934.  His pallbearers numbered Rabbis from some of the Jewish communities in North Dakota Papermaster had helped establish and support, including Devils Lake, Minot, and Williston, as well as peers from Winnipeg and St. Cloud, Minnesota.  Honorary pallbearers included civic leaders such as Mayor E. A. Fladland and religious leaders from several of Grand Fork’s Protestant churches.  Their presence reflected the esteemed position the Rabbi had earned in the city as a whole during his decades of service.

Rabbi Papermaster’s death marked the end of an era in the Congregation of the children of Israel’s history.  The size of the congregation began dwindling in the late 1930’s, in part due to migrations out of Grand Forks caused by the Great Depression.  Members who remained demonstrated an undiminished dedication to their community.  Despite the financial exigencies occasioned by the Depression, the Congregation united to once again erect a synagogue.  Fundraising by intra-temple groups raised a significant amount towards the construction of the new temple.  Approximately 50 individual temple members made pledges ranging from twenty-five to five hundred dollars, for a total of $4,615.  Some could honor their pledges in payments to the trust company holding the synagogue’s debt in sums as little as one or two five-dollar payments over a period of years.  The temple of B’nai Israel opened in 1937, ushering in another era in the history of North Dakota’s oldest urban Jewish community.

No successor of Rabbi Benjamin Papermaster has matched his longevity of service to B’nai Israel’s congregation.  Eight Rabbis, drawn from cities as far flung as New York, St. Paul, and Winnipeg, served between 1935 and 1970, the year in which B’nai Israel’s last resident Rabbi departed.  The resourcefulness demonstrated by the congregation for the last quarter of a century is testimony to its collective, indomitable will to survive as a religious community.

The congregations of B’nai Israel and of Temple Beth El in Fargo forged closer ties in the mid 1980’s.  This cooperation yielded a contract between the two temples allowing B’nai Israel to engage Rabbi Robert Kravitz of Temple Beth El in Fargo to conduct between ten and twelve services a year in Grand Forks.  Too, in 1985, each congregation began taking turns hosting a community Passover seder.

In the early 1990’s, B’nai Israel formally affiliated with the Union of American Hebrew Congregations, the signal body of Judaism’s Reform tradition.  The decision to affiliate reflected a pragmatic attempt by leaders of B’nai Israel to regain autonomy for the congregation.  The Union sends student rabbis to B’nai Israel, thus providing the Congregation with consistent religious leadership and instruction.

Doctrinal issues posed by having Reform rabbis lead a mixed congregation have been resolved by compromises such as using a Conservative prayer book for regular weekly services, and a Reform prayer book for High Holy Day services.

The Sisterhood of B’nai Israel

B’nai Israel’s sisterhood is one of the oldest organizations of its kind in North Dakota.  Although Sisterhood activities and interests have varied in the over one century of its existence, the organization remains an intra-temple group devoted to the synagogue’s upkeep, to religious instruction, and to preserving Jewish heritage.  The Sisterhood furthers many of its goals by sponsoring and hosting fundraisers.  Such events have included annual summer picnics, social teas, rummage, food, and Hanukkah candle sales, and annual Chevra Kadisha[6] suppers.

The group was founded in 1891 as the “Ladies Aid Society.”  After a lapse in activity in the 1920’s, synagogue members reorganized the group and adopted the name of the “Sisterhood” during a meeting on November 12, 1933.  During that meeting, twenty-nine women voted to become members and signed pledge cards to that effect.  Nine others requested time to decide whether to join.  those present voted as well to charge fifty cents in yearly dues.  Five days later, on November 17, 1933, Isadore Papermaster, Rabbi Papermaster’s son, and Louis Rosoff, then serving as the Congregation’s President, each addressed the twenty-two women assembled as the Sisterhood.  Both emphasized that cooperation between women’s and men’s temple groups would be necessary to build a community “… that would stand out as an active Jewish group among the Gentiles.”

Sisterhood members played a vital role in Establishing such a community, and in reaching out to the larger community of Grand Forks.  The Sisterhood’s frequent fundraisers in the 1930’s and 1940’s, open to the public, provided an opportunity for residents of all faiths to gather for social teas and picnics, or to play cards – bridge or grand nola – for an evening in secular halls and clubs.  The considerable funds the Sisterhood generated from these events initially went directly into a trust fund to erect a new synagogue.

The Sisterhood ceased turning over all of the funds it raised to the congregation’s coffers after the construction of the temple of B’nai Israel.  In addition to providing significant financial support to maintain the temple, Sisterhood members purchased books for the temple and for its rabbis, tombstones for deceased members, made donations to various causes (including the Palestine Fund), and helped pay the salaries of the Temple’s Sunday School teachers.  Members also established a scholarship of the Sisterhood at the University of North Dakota in the 1960’s.

In the late 1970’s, Sisterhood members began to focus on their role as women active in the Jewish faith.  At Sisterhood meetings, papers on the subject of women in Judaism replaced the literary lectures and discussions often featured during meetings of the preceding decades.  A group of members traveled to Winnipeg in 1983 to join women from nine other American and Canadian congregations attending a regional conference on women in Judaism.  An event held in the same year bespoke how much the role of women had evolved within the congregation of B’nai Israel.  The Sisterhood held its first Shabbat service on November 18, 1983, a service written by Robin Silverman, Dina Stern, Art Bennett, and Kitty Maidenberg. 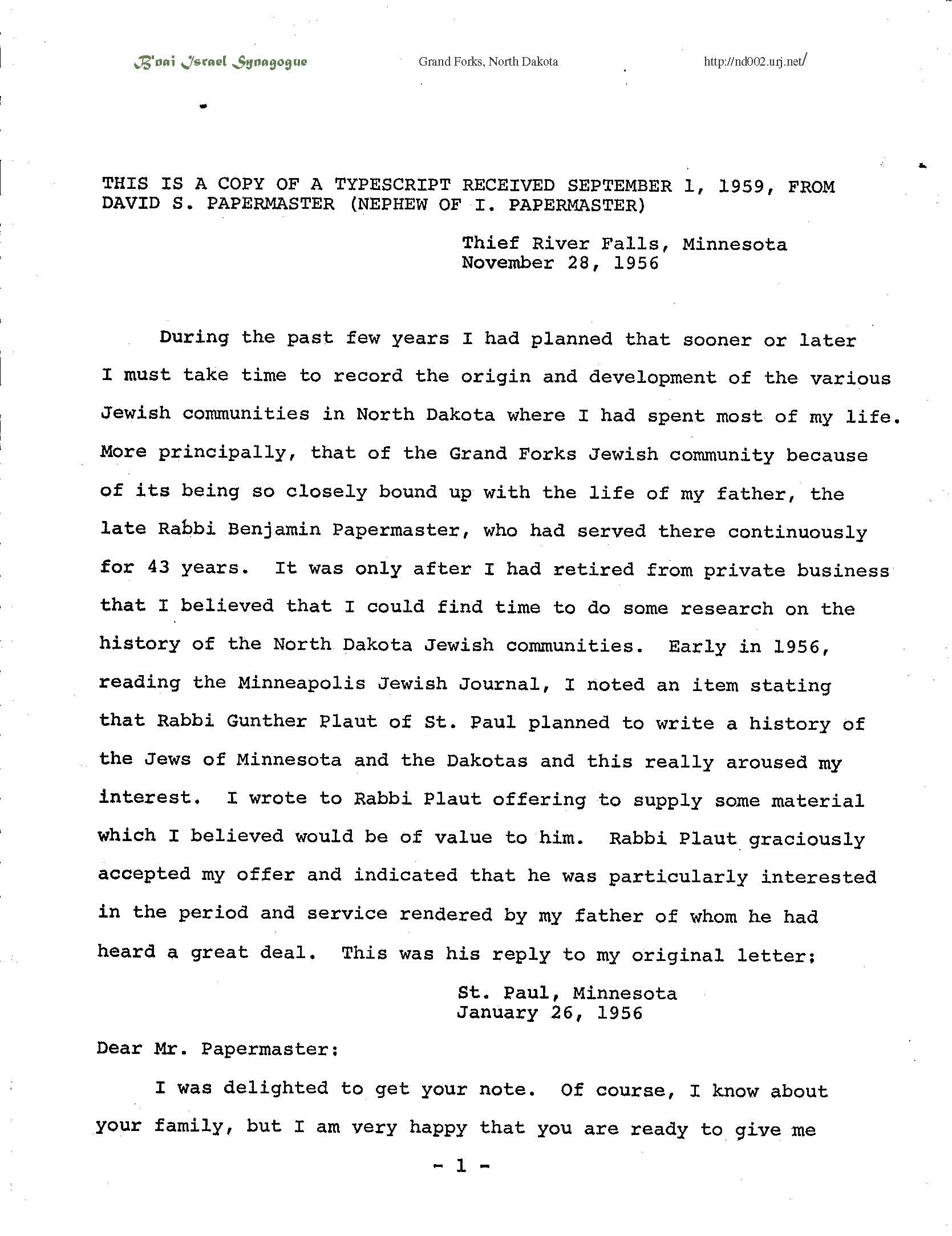 To the right is a shot of an original manuscript on the history of the Jewish community in North Dakota written by Isadore Papermaster, the son of Benjamin Papermaster, the founding Rabbi of B’nai Israel.

The manuscript was found in synagogue files by Brian Kessler, son of two former B’nai Israel congregants. We thank him for scanning the material and sending it to us.

[1] In Ramsey County, some twenty miles northeast of Devils Lake, a Jewish homestead colony was established in 1885.  the location was east of Garske, centering in northern Cato and Harding townships, but also embracing the southern portions of Overland and Sullivan townships.  some Jews were also present in northeastern Webster Township.  The term “Iola” (after a rural post office) has been used to describe this group; sometimes it is called “The Garske Colony.” (Sherman, William C.  Prairie Mosaic:  An Ethnic Atlas of Rural North Dakota.  Fargo, N.D.:  North Dakota Institute for Regional Studies, 1983.  p. 112)

[4] Society for the support of settlements in the land of Israel (Zionist society).